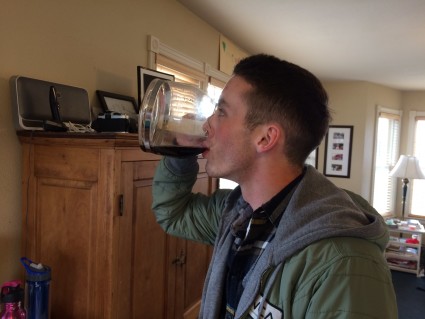 Spring semester is winding down, projects are wrapping up and finals are looming in the near future.  Isaiah had a little hiccup this semester that is still making me laugh, so (with his permission) I just have to share. The caveat is that I’m probably going to miss some important details and when Isaiah reads it, he’ll want to set the record straight, so watch for a potential apology and an update.

Last winter when he registered for spring semester classes, Isaiah planned to take a yoga class. He registered for three different classes, intending to drop two once he chose the class he liked best. The yoga classes are only half a semester long, starting after spring break – and this is where his problem began. Spring break came and went, and he completely forgot about yoga – and all three classes.

Reality struck a week and half into the “half semester” when yoga came crashing into his mind. In a panic he realized it was too late to withdraw without a “W” on his transcript (actually, three W’s), but he had also missed so many classes that he didn’t know if he could pass. Three failed classes would seriously mess up his pristine GPA.

The instructor had mercy on him and said she would pass him in all three classes as long as he didn’t miss any more this semester. He now spends four hours each Tuesday and Thursday taking yoga; that’s a lot of yoga, friends, even for a young, fit kid. Good thing he’s been practicing yoga for years and is good at it. Did I mention he’s also taking Hip Hop?

And the picture above? That’s Isaiah drinking tepid coffee straight from the pot during a quick stop at home between classes.

I’m continuing my Remembering Moments series, but today I need to laugh.

How was your weekend, friends? Take a moment to say hello.