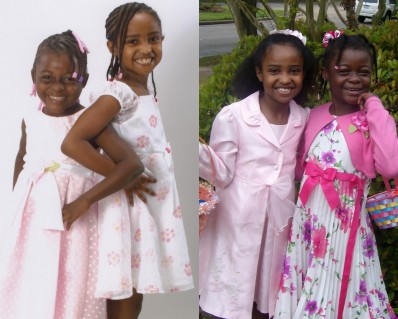 Part 2 of a great post on precocious puberty, written by my friend, Leslie.

This isn’t just a theoretical issue for us. It is a real one. Real enough that I want other parents to be aware about this risk and that “wow, has she grown!” can sometimes be part of a bigger picture. When I saw my daughter getting taller, my reaction was to be happy and excited at how much she had grown, aside from being a little worried for her older sister, who was being asked if they were twins or if she was the younger sister. When I first started noticing some puberty signs when she was 7, I kept an eye on things, eventually asking her doctors.

At the time, I was told it was probably normal development, although fortunately a bone (hand) xray was done.  At that time, the bone age was within the measurement error for the test. (I didn’t know at the time that it was measuring a year older, 8.5 when she was 7.5.) I continued to be concerned about her rapid development, and 4 months later, we had a random experience that prompted medical attention.  Her pediatrician confirmed that she has passed into another stage of puberty and made a referral to endocrinology. And then came a huge hurdle. When I tried to get an endocrinology appointment, it was for 4 months later! Not okay when you are concerned about your child who is experiencing rapid growth.  I kept pushing and was miraculously able to get an appointment for her to be seen within 2 weeks (which almost got cancelled due to overbooking by the endocrinology/ diabetes clinic).

After the endocrinologist got a history and physical (including information I brought about her height growth over time), she scheduled testing and said that she was pretty sure that the tests would confirm that she was in puberty and that she would recommend treatment. She also affirmed that what I was seeing was correct and that it really was too soon. These lab results confirmed that she was in puberty. Her bone age changed by almost 3 years in just 6 months. She was only 7.8, but according to her bones, she was 11! It took another 1 1/2 months for the surgery consultation for an implant to stop puberty, then another month to actually have the surgery done (which took less than an hour including anesthesia. Although it was frustrating to wait so long,  I looked at the calendar and saw that originally she had been scheduled for an initial endocrinology appointment for late January, but due to lots of advocacy, prayers, and tears, she had the endocrinology evaluation in October and the implant by the end of the year. We would have lost so much time and possibly by then the “professional opinion” would have been to just let it go because she would have turned 8.Two years later, I am so happy that I pushed and that she was able to be treated. Beyond being a little socially immature and sweetly naive, she deserves more time before growing up. We have definitely discussed puberty and all of the changes that are normal for girls, as well as why the doctors thing she was growing a little too fast and is having treatment to slow things down. She understands this on her level and to be satisfied with these explanations. She was also really happy to understand the difference between the implant and the monthly injections. I hate to think what she would be thinking if I hadn’t brought it up intentionally. Two years ago, when she was 7.8, her bones indicated she was 11. (This was due to precocious puberty, not a mistake about her age.) Thanks to treatment, she has only aged another 6 months in 2years, with a bone age of 11.5 contrasted with her chronological age of 10.If you’ve read this far, thank you! Here are some take away things I’d like you to know about precocious puberty/ puberty:
1) Puberty is about growth, not just sexual development. It was a big “AHA moment” when the endocrinologist connected my daughter’s increase in height with other signs of puberty. If you have an adopted child who is near the top of the growth charts, it may be more than good nutrition or genetic height at work. It is a real perspective shift to go from “wow, she is growing so fast!” to “wow, she is growing SO FAST.”
2) Puberty is about normal human development, not something secret and shameful. For too long, the grown-ups have transmitted shame and secrecy about normal human development from one generation to another. Puberty is normal, not something shameful. We adults really need to work to get over this so we can raise healthier children. Why should children feel ashamed of normal development and/ or medical conditions (of any sort) that are out of their control?
3) Parents of internationally adopted children face some special challenges in getting their doctors to take precocious puberty concerns seriously. The first thing they might hear is “are you sure that is their real age?” Many times, we might not know exactly if it is their real age. Unless you had a bone xray done when they first came home, bone xrays can be confusing because there is about a plus or minus 2 year range in accuracy, plus at the time the bone xray is done, if puberty has begun, it may be registering development due to puberty rather than chronological age.
4) Parents of African descent daughters may have extra difficulty getting concerns taken seriously because the “normal range” for puberty for African American girls has shifted down to age 8, with some physicians even considering breast development to be normal at age 6 or 7. Trust your instincts. Keep asking if you think there is more to it than what the medical providers are saying.
5) Precocious puberty (as well as attachment, trauma, prenatal alcohol and substance exposure, among other things) is not limited to children adopted from a particular country. Children adopted from all parts of the world can have tremendous catch-up growth when adopted, and for some, this growth may lead into precocious puberty.
6) Trust your mommy instincts. Don’t just listen to professionals who might say “oh, no big deal.” Do your own research. If something doesn’t seem right, keep asking and keep seeking help. Ultimately this is for your child, and if there is something really going on, there will be evidence that any medical provider will see.Some references if you’d like to read more:
Increased risk of precocious puberty in internationally adopted children in Denmark http://pediatrics.aappublications.org/content/118/2/e391.full
MAGIC Foundation Precocious Puberty information http://www.magicfoundation.org/www/docs/108/precocious-puberty
Growth Charts http://www.magicfoundation.org/www/docs/7/growth-charts
Puberty Too Soon website https://www.pubertytoosoon.com/Home.aspx
“What’s happening to my body?” http://www.adoptivefamilies.com/articles.php?aid=2295
All the best to you in everything!