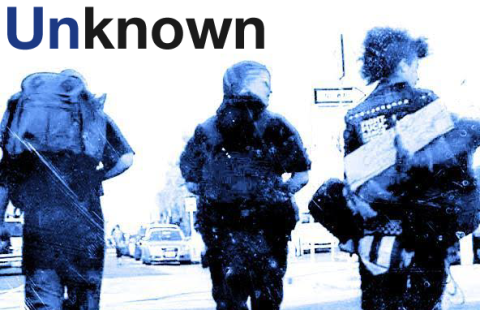 This is the second post in a series written by a dear friend. She has a huge heart for unknown and forgotten children. Over the next weeks, she will be sharing their stories.

We were Michael’s 11th placement in the 11 months that he had been in foster care. Michael would start his 9th high school at our house for his sophomore year. 9 different high schools in one year. 11 different placements. You are probably thinking that Michael must be one nasty kid since he couldn’t stay in one placement, or perhaps he came into care because he was such a terrible kid that his own family couldn’t keep him.

Here is the truth. Michael came into care because he had horrible parents who beat the crap out of him his entire life and finally kicked him out of their home because he wouldn’t fight back. He was bounced from placement to placement because there aren’t enough homes for teens in the system and he had to be placed at shelters that can only keep kids under 18 for 72 hrs at a time.

Did Michael become a difficult placement after his year in care? You bet he did. Did he start out that way….absolutely not. He was a sweet kid with an abusive family.

I have a LOT of feelings about the foster care system. You will hear some of them as we talk about the kids in  care, but let’s just start with this one simple fact.  The system sucks. There are really good people working hard within this system that really want to help kids, but the system makes that a very hard job.

The foster care system is authorized and charged by the state and federal government to see that kids who are not being cared for properly by their biological families will be cared for in our society. They step in with Child Protective Services (CPS) and foster care and group homes and basically any port in a storm to watch kids.

Right now in my county, on any given night there may be 8-10 children sleeping on the FLOOR of the Department of Social and Health Services (DSHS) because they don’t have proper placements for them. That’s a fact…you can check it out by calling social services in your area and asking them if it’s true where you live too.

Several states actually use a large warehouse (YEP….you read that right) where older kids awaiting placement sleep on cots and are watched by social workers who call through the night to try and find open foster homes.

Basically the foster care system is in a state of crisis and kids are bleeding out all over. I’ll tell you more about that later.  But for this story, DSHS called us one day and asked if we would take Michael into our home for a few weeks while they looked for a placement for him. They knew we take in homeless teens from time to time and they said we could serve as “suitable adult placement” since we aren’t licensed foster parents.

Michael’s situation worsened with each placement. Last time we checked in with Michael he was living in a friend’s garage or staying in shelters. He asked my husband to come with him to his aging out meeting with DSHS. He will join the 25,000 kids between the ages of 18-25 who age out of foster care every year. Here are the stats for them. 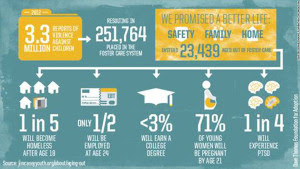 This doesn’t even mention the one in four kids who end up in the criminal justice system after aging out.

Michael was a sweet kid who just wanted to find a family to love him and not beat him. After one very difficult day, he sat in my guest room and sobbed like a baby telling me that he didn’t want to stay with us any longer because it was too hard to see the kind of life he never had and would never get to have. He said he felt like he had to hold his breath the entire time he was there just waiting for the day when he had to leave.

He cried because he was jealous of our two adopted sons that they had the life he never had. He cried because he hated his parents but he loved them and wanted to go home but he knew he would be beaten again….and again. We sat and cried together.

Our system for caring for hurting kids just sucks.