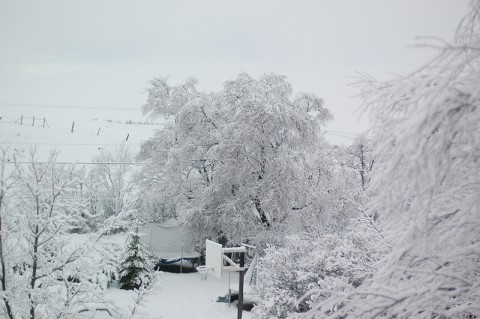 Russ is out of town for work and it has been snowing like crazy, once again making life a little bit more complicated.  Fortunately the guys have been able to get in out and of our driveway without needing to plow. With more snow predicted, we’re thankful that Russ will be home very soon.  I am particularly proud of Ladybug who went out in the crazy, blowing snow to feed the cows.  She is amazing!

I am happy to announce the winner of last week’s giveaway of the Empowering, Connecting & Correcting Principles DVD from Empowered to Connect and Dr. Karyn Purvis. Rusty went through each comment figuring out how many “chances” each person got and then used a random number generator to select the winner — and the winner is:

Rachael who writes the blog Strength Will Rise!

Rachael, email me with your address at lisa@onethankfulmom.com and I will get the DVD in the mail to you.

Thank you to everyone who entered.  I will be announcing the winner of the Rockin’ Mama Challenge giveaway very soon, so keep watching!  Last but not least, I have another giveaway coming up within the week for a gift certificate.

On to our Tuesday Topic.  This week’s question is:

… my husband and I are in the process of adopting three kids (2 year old boy, 6 & 7 year old girls). We also have a 21 month old son we adopted at birth domestically.  I have a question I’m wondering if you (or your readers) can help answer.

We have read “The Connected Child” and plan to implement as much of it as we can.  We currently use spanking to discipline our 21 month-old, when needed.  We do not plan to use spanking for our kids adopted from Africa. How do we continue to use spanking with our 21-month old, while not using it with our other kids?

I’m sure there will be many opinions about how to correct and discipline children, but I think we can have a good discussion on this topic.

Please leave your thoughts as a comment.  If you prefer to comment anonymously, that is fine as well.  Thank you for being such great readers and supporting one another on this remarkable journey.