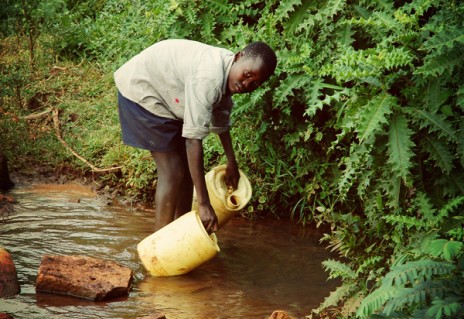 Hi, this is Rusty, Lisa’s son.

Last summer I spent a lot of time sitting on top of strangers’ houses, tearing shingles off their roofs. As I sweated it out in the summer heat, I began asking God what He wanted me to do before I start college. Over the break, I spent a week at a church camp, and later went on a short-term mission trip, but still didn’t feel pointed in any direction.  I didn’t find my answer until late August when I was asked to speak to a group at my church about the water crisis and my experiences in Kenya; I had just over half an hour to prepare a presentation and I was not looking forward to it. But by the end of the talk I realized that this was the opportunity I had been looking for to continue the work I started last winter in Africa. Six months from now I will graduate from high school. My prayer is that I would make this time matter.

At the beginning of the school year I launched a project called The Water Fight. It is a student-led initiative committed to fighting World Thirst. The project is made up of different groups (youth groups, student clubs, and even families) spread around the country that raise money for water projects, spread awareness of the crisis, and fight for something bigger than themselves. The Water Fight operates under Until Then.

When I traveled to Dago, Kenya in December with Until Then to dig the first well, I was struck by the power of water. Clean water brings health, allows children to get an education (instead of spending hours each day carrying water on dangerous roads), empowers women as they care for their families, and creates economic development. Nearly one billion people don’t have access to this kind of water. I met these people and experienced their crisis first-hand.

Dirty water kills more people than all forms of violence combined. By the time you’ve read this far, a child has died from a water-related illness. This Christmas we’re fighting back by digging a well in the Tulwet region of Kenya. 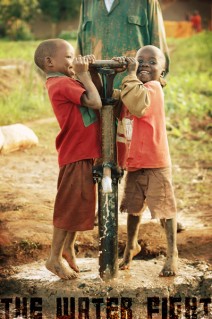 Using a low-tech, low-cost drilling method developed by Water For All International, we are digging wells for roughly $1000 a piece. Each well provides clean drinking water for upwards of 500 people. This is where you come in. For just $10 you can give the gift of clean water to a family of five. Imagine how many lives you could change by giving a better gift this Christmas. Consider making a donation in honor of a friend (or spouse, sibling, etc.) as a Christmas gift to them.

It may be hard to believe a well can be drilled for so little money, but we have already completed eleven wells since December 2010 that are serving the people of Kenya. Our team has affectionately dubbed the process the “Flintstone Method.”  Our actual cost is approximately $1300, but we currently have support for our Kenyan team, which lowers the cost even more. These simple wells can be managed by a local community and are made completely with parts that are locally found. This means no broken pumps, or wells that no longer function.

Please support me by spreading the word (see the sharing buttons below the post) and helping The Water Fight reach its goal of $1000 by Christmas Eve. If you would like to know more, please visit thewaterfight.org. To make a donation, you can simply use the widget below or visit the website.