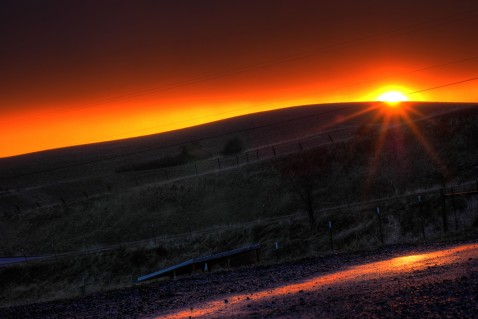 Yesterday began with a “sore muscle” in my calf, and ended with a diagnosis of a DVT (deep blood clot), twice daily injections, coumadin, and an appointment with a hematologist. It was a hard day. More than anything I was stunned to find myself back in a world I hoped I had left behind.

I had the flu in early February and was really wiped out for a couple of weeks.  I just hadn’t been able to feel good again. I wondered how my immune system was doing and if the flu might have triggered a flare of my autoimmune disorder (we still don’t know the answer to that). Then last week I noticed I had a sore leg. The pain increased and on Sunday I told Russ that I had felt this particular kind of pain before  – 18 years ago when I had a DVT. I’m rather amazed that my body recognized that unique pain and knew what it was.

Regardless, I didn’t even want to think about having a DVT, and didn’t want to go to the doctor to find out if it could be true. I wrestled with it all morning, and I can honestly say that this is one of those times when I was overwhelmed by a compelling sense that the Holy Spirit was prompting me to go. I tried to ignore it,  but finally called the clinic. They called me back at 12:20 to say the doctor could see me at 12:30. By 1:30 I had seen the doctor at my clinic, had labs drawn, and was at the hospital having an ultrasound of my leg – there are some beautiful things about living in a small town.

When the DVT was confirmed, I cried. I spent many years struggling with an autoimmune disorder, that primarily gave me very low platelets, but also caused clotting problems. I bleed. I clot. It seems like they would balance one another out, but it is far more complicated than that. I spent hours of every week in medical appointments, was hospitalized, had a DVT, lived on prednisone, had many blood tranfusions and treatments, had my spleen removed (no laproscopic procedure for me – too much bleeding).In the midst of it all I gave birth to four more children (six total), nursed them all, homeschooled, and Russ began his career. I look back and it is all a blur.

Then it seemed that I was finally well, until the fall of 2002 when Sunshine was nearly a year old. I hit the bottom of the platelet barrel and it was bad. The condition had become refractory – which meant that no treatment we tried was successful. We were scared. I was afraid to go to sleep at night not knowing if I would wake in the morning or if I would have a stroke and find myself unable to speak, or walk.

Then the doctors decided to try a new treatment. I remember being in the cancer treatment room, knowing darn well that I was the healthiest person there as we all sat attached to our IV poles, medication dripping into us. I was blessed. In just a short number of treatments, a treatment that didn’t even cause my hair to fall out, I began to recover. The cells that had been destroying my platelets were now themselves destroyed. I went into remission.

We tested my blood daily, then every other day, then weekly, monthly and eventually every other month. As the years went by I checked it less frequently, but at least three or four times a year. I thanked God for a normal platelet count every single time and counted myself among the most fortunate who maybe, just maybe are cured.

Yesterday Russ and I sat in the parking lot of the pharmacy (after picking up the syringes preloaded with medication) and I cried. This DVT brought all of the feelings and fears rushing back like a hurricane. One worry after another spilled from my lips. Russ finally grabbed my hand and said, “Look at my eyes.” I didn’t look at up. “Look at my eyes,” he repeated more firmly.  “We do not need to worry about tomorrow, all we need to do is take care of today. One shot. One pill. We can do this.”

And we did. And today I got up and gave myself another shot, and it was fine. I’ve done this before many times (with daily heparin shots through two pregnancies), one week of shots is a breeze. I just need to sink deep into the peace that only Christ can give.

Our prayer is that this DVT is not the beginning of a long cycle of struggle. If it is,  I’m going to need a lot of strength and grace. I said it myself at the Refresh Conference, there are lessons to be learned in suffering; this is not the way we would choose to learn them, but it is the way God has chosen to accomplish it.  We trust completely in God’s goodness, his sovereignty over every detail of our lives, and his abundant love.

Thanks for reading, friends; this was cheaper than therapy.