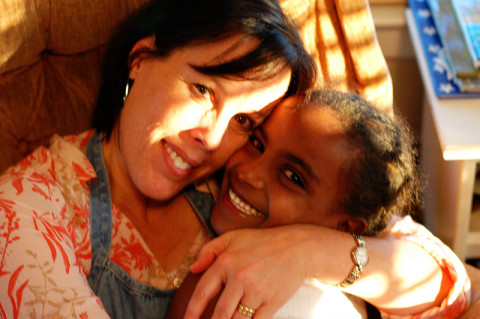 “Here is the world. Beautiful and terrible things will happen. Don’t be afraid.” Frederick Buechner

After nearly four months, I returned to the place of our accident – where Kalkidan’s life on earth ended and her beautiful eternity began. Russ and I were on our way to the Spokane Orphan Summit and the best way to get there was to drive straight up Highway 95 and then cut over into Washington. It couldn’t have been a better opportunity; with no children with us we could talk and cry without concern for anyone else

As we drove north, I grew more anxious, not in a terrible way, but in anticipation of something I couldn’t imagine; I had no idea how I was going to feel. At one point on the drive I told Russ we’d reached the last place I remembered that day. We drove on, through a small town, knowing we would arrive soon. As we approached the curve, we both grew very quiet. Russ turned onto Windfall Pass road where it intersects the highway, and parked.

Holding hands, we crossed the road and stood in the grass on the other side while Russ described what he remembered. I felt a little confused and had a sense that it just couldn’t be. How could something so tragic have happened on this nondescript side of the road? Russ showed me where our car had landed on its side and where they had worked so hard to resuscitate Kalkidan. I grew still when I saw two syringes and a blue latex glove on the ground.

Russ wrapped his arms around me, I leaned against his chest, and then the tears came. As if a cork had been pulled free, I cried, loud, gulping sobs – the kind I hadn’t sobbed before. As we stood in the wind, cars going by, the sobs rushed out where nobody but Russ could hear. Then we stood, letting ourselves be in this place of such significance, and we prayed. We thanked God for his mercy and kindness, for Kalkidan’s life, and for mine. We told Jesus that we love him and trust him.

There is nothing more for us; we are clinging to God’s promises.

I send my love to each of you this morning. I know that many of you are suffering, wondering how God is going to work your situation for good. We can only trust – knowing his love is deep and wide, and his plans are far better than ours.