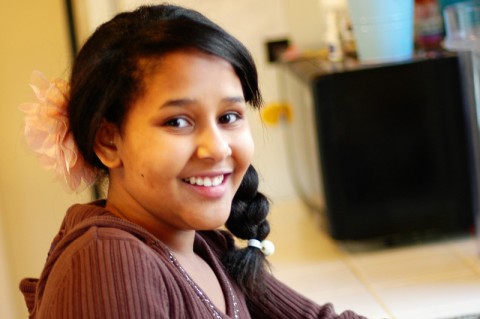 Today marks my 28th day of rocking Honeybee! We began on December 20th, so clearly, I didn’t manage to rock for 28 consecutive days, but we carved out the time every day we both were home and there was even a sliver of time to rock.

Our 15 minutes have often been taken up with Honeybee talking, she is an 11 year old girl after all, and she has lots to say.  Because we’ve worked hard to have our time alone, she has told me more about her life at the orphanage, about her friendships, and other memories.  It has been precious.

At one point during the Challenge I wasn’t feeling well and didn’t have the energy to hold my big girl and rock.  She accepted lying down on the sofa next to me and talking.  Even last night I was so tired that we snuggled up on the love seat rather than rock and it was a very nice time.

In addition to rocking Honeybee, I’ve tried to rock my other four younger children when I can.  The other day I asked Eby to come rock with me.  He said he didn’t want to sit with me, but he came over to the rocker,  turned his back, and perched on the edge of the seat between my knees.  I reached out to pull him up on my lap and he squirmed out of my arms, and sitting again on the edge of the chair.  I told him that I wanted to rock him while he had some milk, which I offered to him.  He took the cup, but refused to sit on my lap or even lean back against me.  I put my hands on his shoulders and just sat quietly while he gulped down his milk.  Then he hopped out of the chair as quickly as possible.

I share this because I know that many of us have children who avoid touch and are resistant to affection.  Is it a sensory problem?  Is it an attachment problem?  I’m not sure that I can tease them apart.  I just accept that Eby is still learning how to accept touch and affection and some days are better than others.

Just last night he snuggled up against me, his head resting on my shoulder while I read the Bible to him.  We’re slowly finding our way.

Have a great Friday everyone!  If you haven’t joined the Rockin’ Mama Challenge,  it is not too late – just last night another mom joined us.  You may not be able  to rock for 28 days before the Challenge ends, but what matters most is that we love our children and give ourselves fully to their healing process.