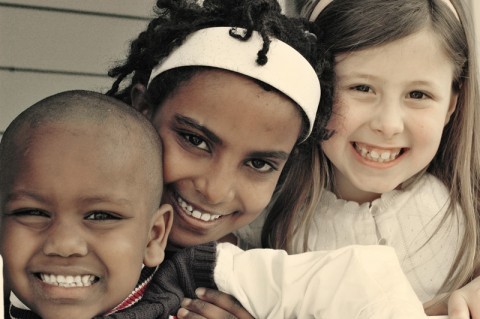 It is simultaneously so hard, and so healing to write this. You can find the rest of the story here:

We stopped briefly at the bottom of the driveway while I put a stack of Christmas cards in the mailbox. After driving one mile into town for gas, we turned and headed north, up Highway 95, toward Coeur d’Alene and I90.

Kalkidan snuggled into her fleece blanket, popped in her earbuds, and most likely began listening to a new Adventures in Odyssey, or possibly music, we’re not sure. I sent a text to our friend, Kristen, to let her know we were on our way and would meet her at the border in three hours.

There was 1/2 inch of snow on the road, just enough to prompt Russ to be cautious, but not enough to be concerned. The roads seemed fine, although we drove more slowly than normal just to be careful. Russ and I took in the beautiful scenery of the snow-dusted rolling hills of the Palouse; it was a beautiful morning. With Kalkidan content in the backseat, it seemed that our special date had already begun.

I remember driving past the road to Potlatch, and a short while later seeing the simple, white church on the hillside where Noah and Katie were married. The car in front of us turned off into the rest area and we went on – and that’s actually the last thing I remember of the drive. We continued north through Tensed and beyond, but I have no memory of it.

There is a very tight curve on the road that I’ve cautioned my children about many times since they were old enough to drive that far from home. The first time I drove north on Highway 95, I noted a white cross decorated with a pair of drumsticks on the side of the road. It was there for many years and always made me think of the person who must have died there. I drove that area of the highway with respect for the curve in the road.

I don’t remember approaching the curve, but I know that Russ took it slowly. As we neared the end of the curve, we hit ice and lost traction, sliding across into the oncoming lane. Being the Saturday morning after Christmas, there had been very little traffic on the rural highway.  We should have slid off the other side of the road into the farmer’s wheat field, as many others have before – in fact, there were three more accidents at that very corner the same day. But that wasn’t to be.

My only memory is very brief, yet it’s nearly like slow-motion; I can see and feel it now as I write. I saw the other car approaching and realized we were going to crash into one another; I felt us sliding and the rear of the car pivoting. Strangely and thankfully, neither Russ or I felt any fear.  None of us cried out; we doubt that Kalkidan even knew we were about to collide. Then I heard the loudest, metal-on-metal, glass-shattering sound.

I woke to find our car lying on its side and Russ telling me that we had been in an accident. I saw the deflated air bag and shattered windshield in front of me. Russ was trying to open his door, pushing it upward toward the sky. My hip hurt terribly and for some reason I thought it was due to my seat belt, which I begged him to unbuckle. As he did, I fell slightly more onto the door.

It was then that I realized my right arm had gone out the now nonexistent window as we spun and rolled in the collision, and was trapped under the side of the car. I felt panic rise in me; I was very aware that I could fall apart or I could be calm. As the realization that I was trapped in the car became more clear, I chose to stay as calm as I could. It was the grace of God.

In the midst of this horrible and terrifying time, we felt God’s presence in a way we never had before. Russ and I both experienced an uncanny sense of peace. We were covered by a gentle weight, a softness,  that I believe was the presence of the Holy Spirit. Although I can’t say that I saw them, I have a sense that angels were with us.

Time passed, but I have no memory of it. I know from Russ that other drivers stopped and ran to help us. A few men forced the rear door of the minivan open and a nurse, who had been on her way to meet friends for their annual breakfast gathering, crawled in to help Russ check on Kalkidan. She initially thought she felt a heartbeat and instructed everyone that Kalkidan could not be moved until the emergency crew arrived. When she checked again, the faint heartbeat was gone, so Russ unbuckled her, carefully lifted Kalkidan out of her seat, and passed her back through the now open end of the minivan.

Russ threw sleeping bags on the ground and they laid Kalkidan down near the car, covering her with blankets to keep her warm. The nurse began chest compressions and instructed Russ to breathe for Kalkidan. Between breaths, Russ called out to Jesus, asking him to heal her.

My next memory is of opening my eyes again, and realizing that I was praying aloud the prayer I learned from Elisabeth Elliot many years ago and always find in my heart when words fail me, “Lord Jesus Christ, Son of God, have mercy on me, a sinner.” A man knelt down next to the car, I could only see his knees. He reached in the car, took my left hand in his, saying, “My name is Dan and I’m here with you.” I grabbed his hand, held on, and began praying again, “Lord Jesus Christ….”

The way I was pinned in the car, I could only see straight ahead of me, and the image is clear in my mind. Before me was dark brown dirt with bright green wheat sprouting up through it, a patch of white snow in the distance.

I heard Russ saying, “Come on, Kalkidan; you’re a fighter.” I could hear someone counting aloud and I realized what was happening. Shaking and crying, I asked the man, “Is that my daughter? Are they doing CPR on her?” “No,” he answered, “It’s someone from the other car.”

Later we learned that the name of the man driving the other car was Daniel. We’ll likely never know if he was the one who came to comfort me.

At some point I became aware of men’s voices talking about trying to lift the car off of my arm, but they decided the risk of me bleeding or being further injured was greater than leaving me where I was. Emergency crews were on their way from the south and the north, all coming to help us. They would know how to get me out.

Friends, thank you for letting me tell this story. My experience of fading in and out of awareness while still being conscious has given me a deeper understanding of our children who have experienced trauma. When they say they can’t remember events in their lives, or when memories are jumbled together, I completely understand. I suffered a mild traumatic brain injury from the impact, but I think it’s more than that. I believe the trauma overwhelmed my brain and perhaps I couldn’t process all that was happening.

I also believe it was God’s grace to me. Had I been completely lucid, terror and pain would have overwhelmed me, but I was covered by the calming presence of the Holy Spirit, and I am forever grateful.