My friend, Marissa, has five children, three of whom are from Ethiopia.  When her oldest two arrived home just a little over a year ago, they spotted our family picture on the refrigerator.  Her daughter looked at it, then leaned closer and looked at it again.  She pointed at the photo and asked incredulously, “Dimples?”  “Yes,” Marissa answered, “That is Dimples.  Do you know her?”  Through an interpreter, she explained that she had grown up very near Dimples’ family and that they were neighbors.

Addis Ababa is a big city of nearly three million people.  What are the chances that my child, and my friend’s two children, could have lived within 20 yards of each other, ended up in the same orphanage for children with special medical needs (although the girls were there at different times), been adopted by families in the same state, and that those two families would be friends despite living 300 miles from one another?

I’m pretty sure it is a God thing.

The beauty of it is that Marissa’s daughter is quite a few years older than Dimples, so she has been able to shed some light on stories we couldn’t understand.  For instance, Dimples has a fear of the sound of marching.  She told us that mean soldiers had marched in the streets near her house.  We had been to Dimples’ house and it was not much of a street at all; it just didn’t seem plausible to us.  But she told details of hiding under a bed in fear while “soldiers” broke down their door.  We tried to piece the story together, but it wasn’t until Marissa’s daughter came home that we understood that riot police had come through the streets following an election, breaking into houses and even shooting people.  It was terrifying for everyone.

Marissa’s daughter also knew Dimples’ family – their mothers were good friends before they both died.  I cannot tell you what a gift it is to have a link to Dimples’ life before we knew her.  I don’t want to ply T. for information, but even on this visit she said a few things that added pieces to our puzzle. 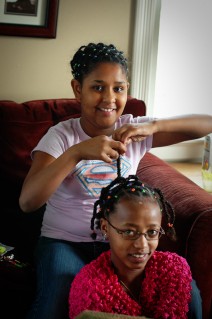 The girls had a great time together, staying up late, listening to music, braiding hair, and generally being young teens.

Here are the youngest eleven before leaving for church Sunday morning.

It is early on Tuesday morning and I’m just about to watch the Insights and Gifts series from Empowered to Connect as a refresher for a short talk I am giving Sunday morning.  The kids will be waking soon and then another school day will begin.  There are lots of stars in the sky; I’m hoping for a sunny day.

friends who are relaxed and easy to host

Russ taking the boys out to work in the aspen grove

cups and cups of coffee

rosy cheeks and lots of chocolate

laughter that is good medicine

Have a great Tuesday, friends.