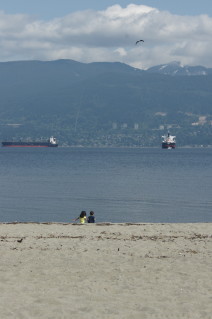 Today I bring part three of a  four part series from my guest, Sarah. When I published my post, Have We Made Attachment an Idol, she wrote a comment so insightful and beautiful that I asked her to develop it into a guest post. That post was so rich that I asked her to expand it, and before we knew it, we had a four part series. I am very honored that she is entrusting her story to me – it is tender, raw, and hopeful.

Within days of arriving on the west coast I met Kevin. He was unlike any boy I had ever met. He was impossibly silly and sagely wise. He was over-the-top ridiculous, a bookish introvert, a natural leader with an enormously kind heart and even bigger dimples. I had always been attracted to clean-cut volleyball-playing types but there was something about this guitar-playing, scruffy-faced, plaid-shirted, ripped jeaned and pony-tailed guy. I was smitten.

That he had also been through his fair share of ‘stuff’ made it all that much sweeter. By Halloween we were officially dating and we spent our first year talking until sunrise, sharing the stories of our childhoods, and the dreams for our futures. He made me feel safe, heard, respected, comfortable, adored and loved.

All that said he had some serious work to, as he likes to say, “crack me open.” I was a bit of a tough nut by then. I did not know how to be in a relationship – one where deep conversation mattered, where affection was freely given and received, one where cold “I’m fine’s” did not cut it, one where I was expected to see and be seen.

Four-years into our relationship we decided to get an apartment on campus together – we were finishing our first degrees, making plans to apply to professional schools and talking about getting married. I awoke one morning in a flood of tears – choking out the words “I’m not okay. It wasn’t ok. I’m not actually fine”.

It was the first time I had ever really broken open enough to admit how terrifyingly awful, how unbearably sad it had all been. As our love grew, as my sense of safety and trust anchored more deeply I began to slowly makes sense of who I was and how I became to be – like a slowly spinning kaleidoscope, the tiny shifting pieces began to form a clear and honest image.

It was through my relationship with Kevin that I began to be my true self.

Unfortunately it wasn’t all wine and roses. Somewhat painfully I started realizing some of my patterns – my ‘stuff’ that was getting in the way of our love. I started recognizing that these behaviors had roots – all the freaking way back to childhood. Like clockwork I would freak out when Kevin was going to leave – I was a peach if I was going on a trip without him but when he was the one doing the leaving I was a panicked, angry, fighting mess.

I certainly wasn’t particularly kind or compassionate when he was sick. Most girls would bring ginger ale and chicken soup – I would breathe fire at him. He’d cough; I’d think he had cancer. He’d vomit and I was convinced he was dying.

He also gently told me about my geographic personalities – the west coast me that he knew and loved. And the weird, false, awkward, peace-keeping-pleaser-me that I would inevitably become on visits back east to visit my family. He didn’t recognize me when I was with them.

Through loving him I also realized my habit of causing chaos when life got a little bit too good. I began to recognize my fear of really living a beautiful life – that I tended to muddy things up, stomp on, rip up, crap upon all that was going well – in fear that it would all end soon anyways, so what was the point?

It has been a constant practice to keep my heart open, to let love in, to not shut down in attempt to protect myself from the next loss that life will inevitably throw at me. It has now been eighteen years since that first sweet kiss, eleven years since we stood atop a mountain and married under the hot August sun, 5+ years since we adopted our beautiful daughter and 2-years since we first learned about our baby boy awaiting us in Shanghai.

I am living a lovely, full, rich, happy, blessed life. Those childhood hurts are still there – likely rooted deep within me forever. It is a constant practice to notice when they pop up as pesky weeds. For many years I let the weeds strangle out the beauty. Happily, thankfully, gratefully it is a sweet relief to now be able to recognize the weeds and pluck them when they burst through – allowing me to then take the steps needed to nurture, cherish and protect the blossoming beauty that is my life.

Please leave comments of encouragement for Sarah – as you can imagine, this is not an easy story to share and it is coming from a deep place in her soul. The glimpse she is giving us into her experience of being orphaned is invaluable.

I look forward to sharing Sarah’s fourth and final post next week.