Last summer Kalkidan, Claire (Sunshine), and Eden made a bucket list. They were so excited that Kalkidan was coming home and they had big plans – lots of big plans.

This friendship goes way back – all the way back to the beginning. In fact, I was at Eden’s birth and I like to tell her that she was such a cute baby that I couldn’t resist having one more of my own – so God gave me Claire. They’ve been like sisters more than friends, and thankfully, Eden’s mom, Signe is one of the people I love most in the world.

In 2007 when Kalkidan came home from Ethiopia, they became three peas in a pod. It wasn’t always easy because scarcity ran deep in Kalkidan, who had never had enough of anything, not even friends. There were some hard times, but the girls (and the moms) were invested in helping them have healthy friendships. This was so important that when Kalkidan was in Montana, we worked on it in therapy; it was completely worth the effort. The three girls had wonderful visits this summer and then plunged back into daily friendship when Kalkidan came home.

Last summer they made a bucket list of all of the things they hoped to accomplish in the near future. After the accident, Claire and Eden searched for the bucket list, knowing they needed to finish it. Signe told the girls she would help them, no matter what it took, to celebrate Kalkidan and their friendship. I told Claire they should quickly add a trip to Disneyland to the list, but I was joking (sort of).

Tuesday marked one month since Kalkidan went to be with Jesus, and we approached it with sadness. Claire and Eden wanted to take the day off of school, but we couldn’t see that actually being good for them. Signe and I opted instead to take them to do one thing on their list – get frozen yogurt with ridiculous toppings. It was the first time I left the house for anything other than a necessary appointment or church.

Signe and I did a little crying as we watched the two who should have been three. The lively brown girl with the wild hair and incredible energy was sorely missed. The girls feel her absence deeply, yet I’m moved by how well Eden and Claire are grieving their sister/friend. 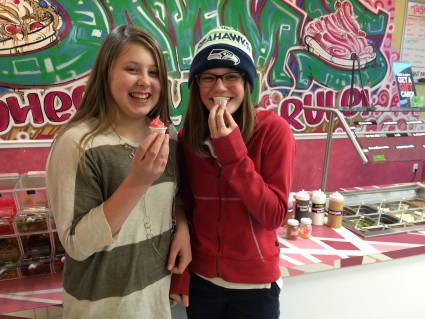 It’s going to take awhile to check off each item on the bucket list, but they’re on their way and even though it hurts, I’m going along with them.