This is what we woke up to yesterday morning.  We got 14 inches of new snow in the last 24 hours of February, giving us a grand total of 43.9 inches in the month.  That is a lot of snow, even for north Idaho!  It was so deep that the little ones had a hard time playing in it, but later in the day, after some of it melted, they all had a good time.

Monday was a crazy day.  It began with snow, of course, and Russ spent the morning plowing our driveway so we everyone could get to work and school.  It was one of those hectic days when I felt I could not even form a complete thought.

The morning began with Little Man coming into my room to tell me that there was something stuck in his nose.  I thought he needed some help blowing it, but as he blew, it seemed like something was not quite right.  He confessed that he had stuck a small eraser in his nose.

I tipped his head back to look, and sure enough, he had a white eraser firmly lodged in his nostril.  I tried to pull it out, but it was really stuck.  We tried blowing again and again, then all at once, it flew out of his nose and hit me squarely on the chest, right on my clean, white t-shirt.  It was not pretty, but we were both so happy that we laughed and laughed.  I did give him a little speech about not putting things in noses, etc., but it remains to be seen if we’ll have a repeat experience.

I think that may have been a first for us — it only took eleven kids for it to happen.

About an hour later Rusty was driving to his Spanish class.  He had taken a capsule (prescription) before leaving and could feel it caught in his throat.  He coughed and all at once the powder shot out of his mouth and began to burn his mouth, throat, and even his eyes.  He pulled over and rubbed snow on his face and sucked on more snow before turning around to come home.  For the next two hours he felt terrible – was sick to his stomach, had red eyes, and a big headache.

It was a strange start to the week, and I’m happy to say that Tuesday was much calmer.

On to the $40 giveaway from CSN Stores. This promotional code can be used at any of the CSN online stores by you – yes you, when you win!  They have tons of different items including wonderful dishes and modern furniture , fun toys, kitchen tools, and baby gear at their All Modern store.  Forty dollars is nothing to sneeze at – think of the fun you could have spending it.

To enter the drawing do one of the following:

1. Add A Bushel and A Peck to your blogroll and leave a comment telling me you’ve done it, or let me know that you already have me in your blogroll. 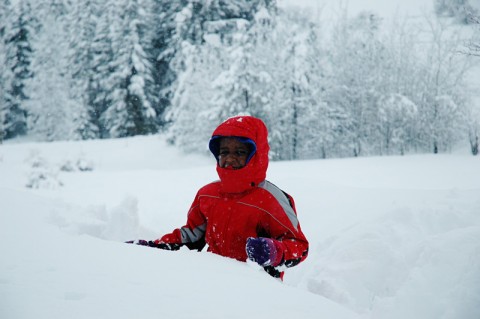