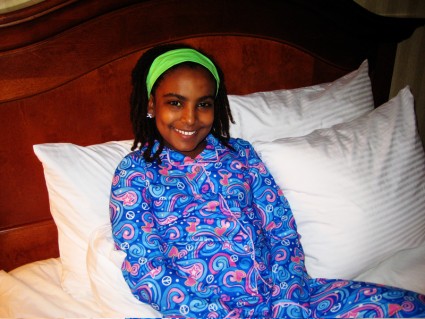 I considered trying to shorten this story, but truthfully, it will take more time for me to edit and cut things than to just pour it out.  I know it is a lot of detail; I hope you don’t mind. I’m going to continue on through the next couple of days, bear with me. If you haven’t seen the previous posts, you may want to read, When the Train Left the Station, and And it Continued Down the Track.

We headed to Montana on Monday morning.  Despite snowy roads, which made travel a little slower and going over the mountain passes a little more exciting, we had a good trip.  The huge semi sliding near the top of the pass was a bit much for me, but Russ can drive in anything and is rarely bothered by road conditions.

Arriving later than we had hoped, we still managed to find a good place for dinner and had a nice time with Dimples.  It was odd being just the three of us; we felt it most when it was time to sleep.  Dimples had a big bed all to herself, so she piled the pillows up and said she was in “pillow heaven.”  I spent hours lying awake listening to Russ and Dimples breathe.  I thought and prayed for a very long time; the morning was coming soon and with it changes that I wasn’t ready to face.

We arrived at the school at 9:00 and quickly began the admissions process by gathering with a group of staff around a large table.  As the reality of the plan began to sink in, Dimples began to weep – silently.  Tears rolled down her cheeks, falling on her jacket.  Russ and I struggled to maintain our composure and simply rested a hand on her, occasionally brushing back her hair or offering her a tissue.  After a few minutes, which felt much longer, one of the staff said he would take her around the facility to see what the other kids were doing.  He took her hand and they walked out the door. The moment it closed, Russ and I grabbed hold of each other and cried – hard.  I held him tight, and despite the presence of the  people sitting at the table with us, we finally let out the tears we had been holding back.

I learned something about grief that day.  When we cried, the staff was silent – not in an awkward way that made us feel observed, but in a reverent way that honored our sorrow.  When I finally collected myself enough to look up, I saw faces of compassion with tears in some of their eyes.  Nobody felt the need to lighten the mood or fill the silence, they just let us cry.  It made me realize that when I am in the place of comforting somebody who is weeping, I don’t need to have answers or even speak words of comfort, being compassionately present may be enough.

The next couple of hours were filled with paperwork, meeting the staff, and learning more about the program.  In my first conversation with the admissions counselor, she mentioned that the children’s spiritual development is important to the staff and they will do what they can to meet that need.  They have a chaplain who runs a program for Christian education and discipleship that is available for families who are interested.  I talked about our faith and how important it is to us that Dimples continue to grow in her relationship with Jesus, so the Chaplain was asked to be present during our admissions process.

The second time I cried was when the Chaplain began talking about the program and said that he prays for all of the children and their families.  I cried because it touched such a deep place in me,  I cried out of relief that I felt her faith would be safely nurtured, and I cried because it frightens me to trust her care, including her spiritual well-being to people I don’t know.

Soon it was time to go to the cottage and unpack Dimples’ things.  We stopped by to see her as she ate lunch with the kids and then headed to our car  to get her bags.