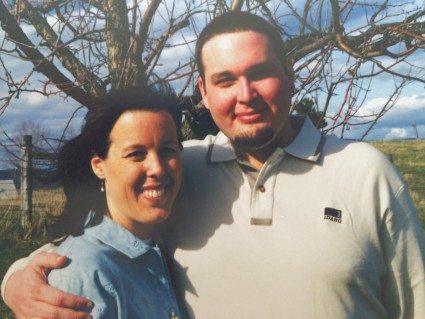 On June 15th I published the post, Not Inoculated; I reflected on the realization that although we had suffered a terrible tragedy, we were not protected from future sorrow. One week later, on June 22nd, my son, Nick, died.

If you’ve read my Tell it Well series, you know that Nick was born when I was a teen and I was forced to give him up for adoption. It was the late seventies and adoption was just beginning to change allowing more openness, sadly Catholic Charities was not at the forefront of that movement. The adoption was closed and I was devastated.

When Nick was 16 I got an email from him with the subject line, “Is this for real? I’m your son.” Thus began a very messy reunion. Thankfully, it grew sweeter and better over the years and the past six months since our accident, Nick was in the closest contact we had ever experienced.

One month before he died he told me his health was failing and that he needed to see me in the next six months. He had a long history of heart problems, but to be honest, I never dreamed it was this severe. I was planning to visit him this fall. He died of a massive heart attack at the age of 36.

I was standing in the kitchen last Thursday night talking with Samuel, Annarose, and Claire. The younger kids and I had just gotten home from a VBS potluck.  I was waiting for a friend to arrive when I got this text from Mike (Nick’s birthfather), “Lisa, how did Nick die?” It was one of the most horrible moments of my life. The physical shock was so strong and I completely fell apart. I kept crying, “No, no no….” Samuel grabbed me and held me tight, telling me it was true.

I didn’t know then, but Samuel had seen a message on Nick’s Facebook wall saying Nick had died, and my sweet son had come over; he didn’t want me to learn it in the same way. Samuel hadn’t had a chance to tell me before I received the text.

Mike had heard from his daughter, who also saw it on FB. He was texting from the Phillipines, where he is a missionary, and he was in the midst of a typhoon, so our communication was brief. Shortly afterward I got a FB message from Mike’s ex-wife who is the mother of four of Nick’s sisters. She said she was trying to get more information and hoped to talk with Nick’s mother.

I could hardly speak through my tears when I called Russ in Kenya. He was nearing the end of a two week trip and was scheduled to begin the long trip home the following day. He was already on his way back to Nairobi from Kitale.

Noah and Katie were celebrating their anniversary in Leavenworth, about four hours away. When they heard the news, they decided to drive here on Friday. Signe came and spent Friday morning with me, just letting me talk, and making sure I wasn’t alone.

Since that day I’ve been in touch with Nick’s sisters, two of whom live not far away, and their mom. She had a conversation with Nick’s mother. I imagine she is doing the best she can as she walks through her own grief.

One of my last texts with Nick was about my visit and he wrote, “Thank you Mom. I love you dearly.”

That visit will never happen and I am heartbroken. And while I’ve managed to write 600 words, I still have this sense of being speechless – like I just don’t know what to say.

This loss on top of losing Kalkidan has laid me low in my heart. I know the Lord is with me, I know he is so near, and I trust him. I’m not happy with him, but I trust him and I bow my knee to him. He is God, I am not.

Saturday I lay on my bed, curled around Kalkidan’s favorite stuffed animal, and wept as I listened to Sovereign Over Us from her memorial service.

You are wisdom unimagined,

Who could understand your ways

Reigning high above the heavens,

Reaching down in endless grace

You’re the lifter of the lowly

You surround and You uphold me,

And your promises are my delight

I don’t know how to embed the video, but you can find it on my One Thankful Mom FB page. It’s on the left side of the page, scroll down just a little. The kids plan to record it for me next fall after Isaiah is home. Sovereign Over Us has become my life anthem.

Once again, friends, I thank you for reading, caring, praying. I am so honored to share my life with you.