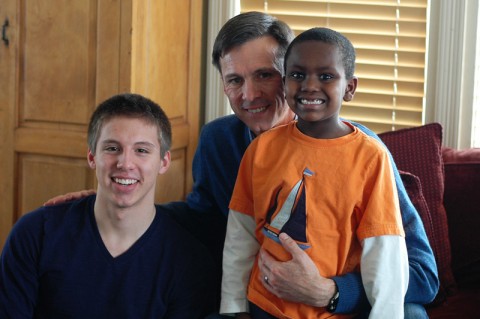 Little Man seems to be thinking a lot about who he is, how he came to us, what it means to have dark skin when ours is light, and most importantly, are robots real and can they get into his bedroom at night.

Little Man and Eby were our first adopted children, and we naively thought that we would give them new names, keeping their Ethiopian names as middle names. I’ve written other posts on naming our children, so I won’t delve into that now, but the real challenge with Little Man is that we couldn’t settle on a name for him. From the time we got his referral, we called him by his Ethiopian name, and then made lists of other names, tagging them on at the beginning – saying them over and over, trying to figure out what would be just right.

We had lots of big kids by that time, so they had LOTS to say on the subject of names.  The end of the story is that Little Man ended up with a first name and two middle names, one of which is his Ethiopian name which we use every day, and the other is Gabriel.

Not long ago Little Man told me he didn’t want to go by his Ethiopian name any more because it was a “baby name.” I tried to explore this with him, but he couldn’t quite tell me what he meant. I wondered if somebody had teased him about his name (which is very unique and not at all like a typical American name); he wouldn’t say.

Then he and Eby went to basketball camp where, unbeknownst to me, he told the coach his name was Gabriel. When I dropped him off on the third day, the coach came to me and said that he noticed there wasn’t a Gabriel on his roster, and that although Little Man had consistently answered to Gabriel the first day, he seemed to have forgotten his name by day two. When the coach called out Gabriel’s name, Little Man didn’t notice. The coach finally solved the mystery and began calling him by his Ethiopian name.

I’m fully aware that trying on new names is not unique to internationally adopted children. When Samuel was eight, he spent an entire week of vacation Bible school being called Peter – another name we had considered for him.

Maybe that is all that is going on with Little Man, but perhaps it’s not. I have no brilliance here; I’m just observing and thinking about what it means to be a young black boy in a white family, where identity and belonging are complex. He’s six years old, so this is the beginning of a long journey – likely a lifetime journey, and we’ll be right alongside him.

Question: Are your children exploring issues of race and identity? How about names?