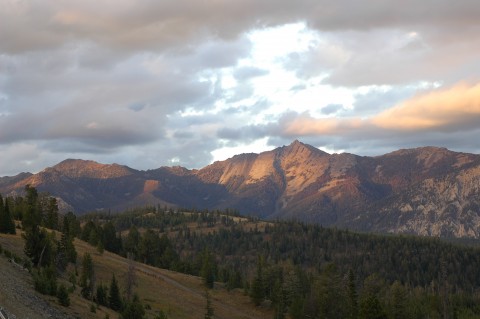 Russ and I traveled to Montana last week for Family Friday at Dimples’ program. I’ve been replaying the weekend in my mind since we got home and think I’ll write it out for my own benefit; you can read along if you like.

The trip started with a beautiful drive through northern Idaho and into western Montana. I was struggling with leaving my younger children again so soon, and overwhelmed at being gone for another weekend. In the midst of packing I had a call from Bee’s new therapist and we scheduled the first of a series of appointments. The reality that I just added a three hour a week commitment to my schedule nearly had me hyperventilating. I had to kneel down on the floor in my room, rest my head on my suitcase, and just breathe.

Thankfully,  Russ had more emotional strength than I did, so he was able to listen as I poured out my “overwhelmed at our kids’ needs” thoughts. As we drove, the scenery got more and more beautiful, and eventually, I was able to relax and transition into the trip. It was good to have time to talk and catch up on the big and small things of our lives. We got into town at 10:00 and headed straight to the hotel, knowing that we were expected to be on campus at 8:00 the next morning.

Family Friday began with the parents, kids, and staff all gathered in one large group. We passed a microphone around a large circle and introduced ourselves. Each person shared a goal for the day, mine was to share some sweet moments with Dimples. The kids returned to their classrooms and the parents broke into smaller groups. Our group was made up of the most amazing, wonderful parents. We shared stories about life with our kids, and many people said things like, “It feels so good to know that I’m not alone and that other parents have shared these difficult experiences.”

The conversation flowed along and it seemed that the parents were encouraged by one another. Then one of the therapists said that she wanted to move into an exercise and if we didn’t mind, she wanted to have Russ and I work with her. I laughed and said, “As long as it’s not a role play, I can do it, but I’m truly the worst actress in the world.” She laughed and said, “Well it is a role play.” I felt just a little panic – I seriously hate role playing, it’s supremely weird and uncomfortable for me. Not only that, it’s even harder to do in front of a group of people I’ve met only 45 minutes earlier.

Then she told us that she wanted us to role play a situation with Dimples where we were trying to connect with her in the midst of a difficult moment (or something like that – to be honest, I can’t quite remember). In the seconds that followed, I was flooded with memories of rages, I felt the fear, I remembered the last horrible night before Dimples went into treatment, and saw the faces of my other children. In that moment I felt physically sick. I choked out something about how I couldn’t do it, covered my face, and burst into tears. Russ pulled me closer to him – everyone sat in silence.

Then Russ started to talk about our experiences of trying to handle rages and trying to keep everyone safe. I knew we were messing up the plan for the meeting, but I couldn’t even take my hands from my face. I felt embarrassed that I had fallen apart when moments before I had been a relatively calm, intelligent, competent mother. I breathed deeply for what felt like a long time, and finally managed to uncover my face, grab a kleenex, and begin listening to the conversation again.

After my massive fail at role playing, nobody else was asked to role play, and interestingly, no parent said, “I’d be happy to do it. Let me give that role play a try.” I wonder if anybody was sitting in the group hoping they would get a turn.