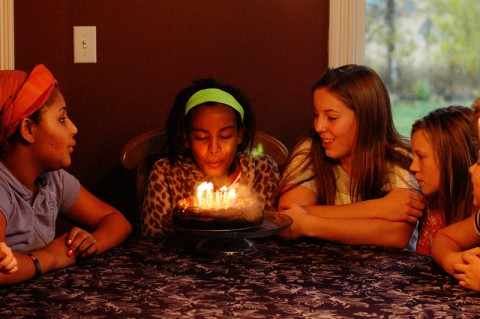 Dimples’ 11th birthday celebration was the highlight of the weekend.  We had grandparents, a cousin, friends, and most of our immediate family, for a grand total of 19 around the table and four children at the kitchen island.  Dimples chose the menu which included ribs, mocha toffee cheesecake, and even spicy Doritos. After a not-so-good morning at church, we were relieved that she enjoyed her party and even her gifts.

Dimples’ birthday followed a potluck we hosted for 50 people Saturday night, which was fun – and seriously wild and crazy.  The kids had a great time and have already asked if everyone can come again.  One of the nicest parts was having other adoptive moms who “get it” here.

It was a very big weekend and I woke up feeling tired; eventually I realized that I’m coming down with some sort of bug.  Mimi was sick last week, and some of the kids have been feeling a little off, so I guess I shouldn’t be surprised. We had a full day planned, including a therapy appointment over an hour and a half away. Russ is going to go in  my place.

I hope your week is starting well.  I’ll do my best to post a Tuesday Topic tomorrow.

Thanks for reading, friends.