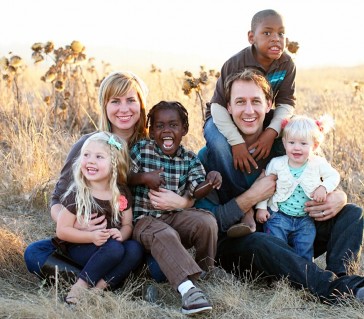 From Kristen at Rage Against the Minivan.

In Haitian Creole, there is a word called “degaje”, which basically means to “make it work”. We are in serious degaje mode right now. I have always scoffed at the idea that there is any manual that can teach a mother how to do things the right way. When you are parenting four small children, one of them who speaks another language, there is NO MANUAL. We don’t know what the heck we are doing.

Our house is pretty much in chaos mode, and the inmates seem to be running the asylum. All three big kids are tearing up the house and working each other into a frenzy of fun. I keep wondering if this is all just a honeymoon phase, and if things are gonna come crashing down in a few days as their adrenaline wears off. For now, it is joyful and exuberant and TOTALLY FREAKING EXHAUSTING. Though I must say, I have never been so proud of Jafta and India as I have this week. Their welcoming generosity and tenderness to Kembert is enough to make me weep.

We are so, so happy that Kembert came home so much earlier than expected, but of course that early arrival adds a bit to the craziness right now. I truly thought I would have a couple months where I could buy a bunch of Creole books and cram before he came. Instead, he showed up with me knowing only a handful of phrases. The language barrier is difficult. I can’t imagine how that must feel for him, to talk and have no one understand him. Today he seemed very frustrated by it. I walk around the house holding my Simple Creole for Adoptive Families, reading out phrases and trying my best. It still isn’t enough. He’s picking up English very quickly but I know he is grieving at times and it pains me that I can’t talk that through with him.

We also thought we would have more time to transition him from Kembert to Keanan. The nannies were beginning to call him Keanan, but for the most part he knows his name to be Kembert. We planned to change his name completely, thinking there would be plenty of time for that transition to occur while he was in Haiti. That didn’t happen, and now that he’s home and dealing with all sorts of acculturation issues, it doesn’t feel right to go switching up his name at this point. So we are calling him Kembert, pronounced Kem-Bay. But some people say Kem-Bear. The real pronunciation is more like Kem – and then a nasal R (make the sound your throat makes if you stick your toothbrush in too far.) Since we don’t plan on going around teaching everyone we know how to do french nasal tones, we say Kem-Bay. I think we may end up keeping that pronunciation but changing the spelling. We went to the doctor today and everyone pronounced it Kimburt. I don’t want him going through life with his name mispronounced. Kembe maybe? Not sure yet.

Speaking of the doctor – two more things we need to figure out: transporation and insurance. We’ve had to drive in two separate cars so far. I’ve always resisted a minivan but at this point I am willing to drive a school bus if it holds all of us. We may have a solution in sight thanks to some very generous friends. We also don’t have health insurance for Kembert. We did not get the IR-3 visa we were hoping for (though we are THRILLED he got humanitarian parole). At this point, his identity is in a kind of limbo . . . he’s not a citizen, and he’s not adopted, and therefore not eligible for any insurance. I’m hoping we can find a solution to that one.

Bedtime is also a big “degaje”. Just the process of readying these four for bed is a two-man, all-hands-on-deck operation. We have two bedrooms for four kids, and every night it’s musical beds trying to figure out the best system. India used to sleep with Jafta, but now she’s booted into Karis’s room, and they are waking each other up. Kembert is waking up at 5am, and the last two mornings we’ve found him playing in Jafta’s bed, who is still trying to sleep. Tonight, we have Kembert in our room, with the hopes that he can fall back to sleep at 5am with gentle encouragement (and cuddling) from us.

And on that note, I think I should go to bed. Because I have a feeling my new son may not comply with that fantasy!

Kristen blogs at Rage Against the Minivan where she writes about being mom of four children within four years via birth and adoption.