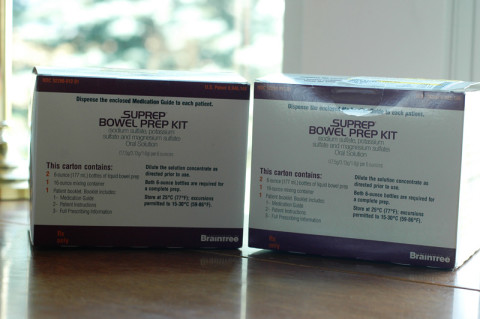 Some people plan couple’s massages. Not us, we like being a little different (as you may have noticed), so we scheduled couple’s colonoscopies. One of the perks of turning 50 is paying better attention to our health. Having an oncology nurse for one of my best friends hasn’t given me wiggle room with things like mammograms or now this – the dreaded colonoscopy.

We could have done our colonoscopies separately, but we chose to have them “cheek to cheek” rather than lose two weekends to this loveliness.

We took our last bites of food before bed Saturday and woke Sunday morning to a menu of clear liquids only.

Sunday dinner was rather plain – I just couldn’t bring myself to cook when not one bite could go in my mouth. For the most part, I tried to stay out of the kitchen. We had “make your own” yummy sandwiches, good chips, fruit, and ice cream. It was not our typical Sunday fare, but it was just fine.

Then there were two lovely rounds of Suprep – which cleaned us out with amazing efficiency. We did one round at 4:00 Sunday afternoon and the second one at 5:30 Monday morning. To be honest, it was not as bad as I feared. Monday morning, after we drank it down, we sat outside in the cool morning and I told Russ for probably the 100th time how thankful I was that he was doing it with me.

As you would expect, we had numerous laughable moments. My favorite was when I was stuck upstairs in our bathroom and had no idea where Russ was. I called his cell and found that he was being held hostage by the toilet in the basement. We laughed and agreed we’d find each other later.

Another crazy thing is that twenty minutes before we left for our procedures, our water shut off. There was no time to figure it out, but we were SO thankful that it didn’t go out even one hour earlier. I can’t imagine doing this prep without fully functional toilets, or sinks with running water. [Thankfully the well-fixing guy came that afternoon, replaced a part, and we had water by 5:00.]

When we got in the car to go to the surgery center, I told Russ, “The worst is over, this will be the easy part,” and that was true. I’ve got notoriously bad veins, so the IV was a little rough, but not terrible. After that, I went to sleep, then woke up, and it was done. We hung out in recovery for a little while, then Mimi and Samuel picked us up and drove us home, where we proceeded to drink smoothies and take a nap.

You’ll be happy to know that we have stellar colons (and we have the pictures to prove it) and the process will not need to be repeated for ten years. We’re pretty proud of ourselves for getting this done; if you are 50 (or older) do it – it’s not that difficult.

In adoption circles, we talk a lot about self-care for parents; I’m pretty sure this makes us self-care rock stars.

And don’t worry, I’ll remind you to get your mammogram in December when I get mine.