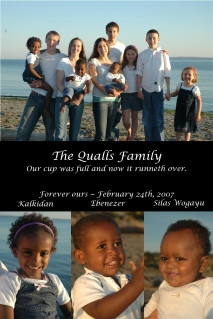 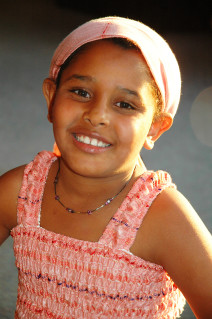 Today marks nine years since the day we met our four children in Ethiopia. Nine years! What a day that was.

We met Kalkidan first, and in the crowd of children, we also met Beza. We didn’t know then that she would become our daughter a little more than a year later.

At the end of the week, we made the long journey home with Eby and Wogauyu. I remember standing for hours on the plane, rocking back and forth with them in our arms.

Kalkidan’s visa was finally approved and Russ returned to Ethiopia for her on May 11th. That was the hardest trip of both of their lives, involving many tears, hours of screaming, very little sleep, canceled flights, 52 hours of travel, and finally unending games of Uno. Have I told you the story about the flight attendant telling Russ they would have to get off the flight if he couldn’t keep Kalkidan’s seat belt buckled?

END_OF_DOCUMENT_TOKEN_TO_BE_REPLACED

Next week I’m facilitating a sibling panel at the Refresh Conference. You all know how passionate I am about giving voice to siblings, in fact I’m currently working on a book on this topic.

My panel consists of two adults, one college student, and two young teens. All are siblings who had children from “hard places” join their families. Some of the panelists were also adopted, others were born into their families.