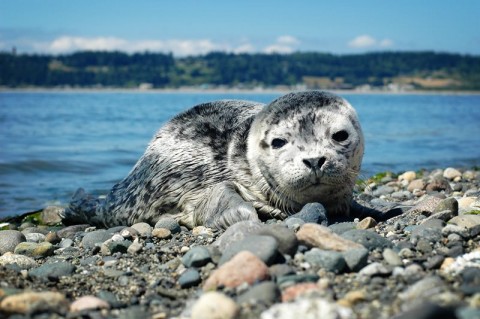 I shared this picture on my One Thankful Mom Facebook page yesterday, and I had to share it again, along with the amazing learning experience we had.

The kids headed out at low tide for a long walk on the beach while Russ and I stayed at the house and enjoyed the extra quiet – checking on them with binoculars from time to time.  When they reached the water’s edge and turned to head back in, we quickly went out with a backpack of juice boxes, snacks, and sunscreen.  The next couple of hours were spent wandering the beach together, visiting with my cousin and her family, and collecting pretty shells.

Just as we walked back to the house for lunch, Ladybug spotted this harbor seal pup on the beach.  I’ve come to Whidbey Island nearly my entire life and have never seen a seal pup on this beach.  We were worried about the pup and wondered what he was doing there.  He seemed sleepy and peaceful, but why was he all alone?  We sat down and watched him for a little bit, taking pictures and talking quietly.  A woman walked by and joined us.  I called my aunt, who lives here year round and she told us to leave the pup alone.  She said that the mother seal will leave the baby on the beach while she goes to fish and then come back to nurse it and care for it.  That made sense to us, and we figured that our presence would likely frighten the mother away, so we marked the spot on the beach with a tall stick and walked back to the house.  Once there, we watched the pup through the big binoculars; hoping to see its mother return.

Sunshine immediately got on the computer and began reading about harbor seals and their pups. We learned that they can born in the water or on land and the place where the seals rest on land is called a “haul out.”  We learned that pups like to rest and sleep on the warm sand and that, even when they are left for a long period of time, they are fine and their mothers will come back for them.  Of course, that isn’t always the case, and 50% of the pups die in the first year of life, but all in all, it was good information.

We worried all day about the pup being stranded at the next low tide, and even reported the pup sighting to a local watch group.  Russ gladly got the GPS coordinates for them and sent the photo they requested.  As it grew dark and cold, the pup got very still.  The kids were afraid it had died and I really hoped it hadn’t.  We assured them that high tide was coming and the pup’s mother would likely be back to take care of him.  We told them that we hoped he would be gone in the morning, swimming with his mom to a new beach.

I was the first one up this morning – something about being squished between Russ and Sunshine (who couldn’t sleep – so then I couldn’t sleep) in a double bed.  The tide was low when I looked through the binoculars, and I breathed a sigh of relief to see that the pup was gone.  Of course, that may not have been good news, given the bald eagles on the beach or other nefarious options, but my fear that the kids would wake to a dead seal pup was calmed.

When the kids got up, we talked happily about how the mommy seal probably came back and nursed her pup and then they swam off to a more private beach where she could take good care of him.

This was a homeschooler’s dream come true – I could not have planned a science lesson this fantastic if I had tried.  We learned as a family, as an event unfolded before us, we discovered we had made mistakes (by getting closer than the 100 yd. limit!), that we had done some things right (we didn’t touch the pup), and that God makes really amazing animals.

I don’t think any of us will forget this science lesson.