Bee is the oldest of our adopted children and the last child to join our family. We met her on our first visit to Ethiopia in 2007. At the orphanage, she endeared herself to us as she carried my backpack, played with Eby, and stayed by my side. When I laid Little Man down to change him, the children gathered in a circle around me; Bee proceeded to hand a diaper wipe to each child. They all washed their hands and faces, then most of them them folded up the wipes and tucked them in their pockets or the waistband of their pants.

Bee’s real name is Beza, which is pronounced “Bay-zuh.” We’ve been told her name means “redemption.” I’ve also seen the meaning “on my side” and “medicine from the heavens.” She was ten years-old when she joined our family, which makes her nearly the same age as Annarose. With advice from our agency, we legally changed Beza’s age at the time of her adoption to make her one year younger. In retrospect, we probably should have left her age as it was, but it seemed like a good idea at the time. She had received only minimal education and was very small; we thought it would give her an extra year to catch up a little.

Beza spent eight of her first ten years of life in an orphanage. She loved the babies there and liked caring for them; she still loves taking care of babies. She is very strong and resilient and has grown so much in the nearly six years she has been in our family.

Her greatest recent accomplishment is a nearly miraculous leap in her reading ability – and even better, she has learned to LOVE reading. She was not literate in Amharic when she joined our family, so she not only learned to speak English, she also learned to read for the very first time. It was slow-going at first, and she was not happy, but in the past year, she has read more, and more, and more. Now she can’t stop. I’m thrilled!

I’m convinced that once you can read, there is no reason to be bored – ever.

Beza has grown to be very helpful in the kitchen, which is a great blessing to me. Last weekend she put in lots of hours of yard work as we combined our family efforts in preparation for the wedding.

Beza loves make up and hair. Last summer she cut her long hair very short and has been growing it back out ever since. Her hair is incredibly thick, even for an Ethiopian woman, and takes a lot of work to maintain, but it really is fabulous when it is big. She can rock an afro like nobody else I know. 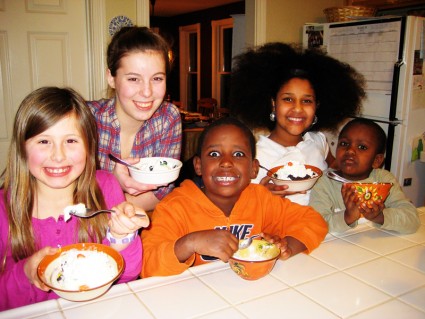 Beza has big plans to spend time this summer with friends in the mountains of Colorado. She’ll even go to camp for a week where she’ll see many of her friends from Ethiopia. We’re going to miss her.

This morning, Beza and I are off to Seattle for a medical appointment. It’s a rare day that the two of us get to spend hours together on the road.

Next week I’ll tell you more about Dimples and Sunshine…we’ll get to the boys soon.

Have a great Thursday, friends.