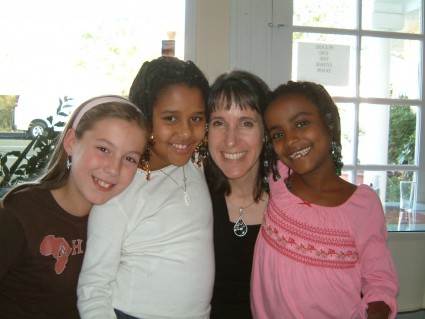 Over the years I’ve written many times about my very dear friend, Michele, whom my kids affectionately call Aunt Michele. There is so much I want to say, but I’m struggling for words today. I’ll let Michele’s tribute from the memorial service speak for itself.

I would first like to thank Russ and Lisa and the rest of the Qualls family for inviting me to speak and offer this remembrance of Kalkidan. It is a distinct honor and privilege and I am very grateful. I would also like to take a moment and thank Russ and Lisa and the rest of their family for the tremendous sacrifices which they have made over the last years to provide for Kalkidan. God has seen all you have done and I am confident that He is pleased.

Well, here we are – most of your favorite people, all gathered in one place to celebrate your life and remember you. I am sure that that makes you happy. And if you were not in a wholly better place right now I am sure you would like to be here with us. You have always loved parties and celebrations, and just being with people. It is one of your many endearing qualities.

One of my favorite and early memories of you actually happened a few months after you came home to your family from Ethiopia. I want to read you something from Pastor Douglas Wilson’s blog — he said it better than I can retell it. This is from Sunday December 23, 2007, the day when you were dedicated to the Lord. (Before I read it I want to mention that Beza had not yet joined the Qualls family, and I have asked my husband, Greg, to read this part.)

“A family in our church — the Russ and Lisa Qualls — recently adopted three children from Ethiopia. Two of them were baptized a month or so ago, but the oldest, a girl named Kalkidan, was dedicated today. She was dedicated because she had already been baptized. She was born in Addis Ababa, Ethiopia, in October of 2001. Her uncle was an Orthodox priest, and she was baptized in the Orthodox Church on the eightieth day after her birth which is their tradition for girls. The Qualls adopted her this last January, and she joined her new family in May. Tomorrow on Christmas Eve, Kalkidan, and her two siblings from Ethiopia, Ebenezer and Wogayu, will all be granted American citizenship.

Just recently Lisa Qualls was reading the children the story of Jesus healing the ten lepers and how only one of them returned to thank Him. She asked the kids some questions about the incident and then asked, “Is there something that Jesus has done for you that you want to thank him for?” Kalkidan said, “Yes”. When Lisa asked her what it was, she put her head down and said, “Jesus come and give me family.”

Kalkidan, I don’t know if you know this, but you almost made Pastor Wilson cry.

I know that you were thankful for the family that Jesus gave you, but it was not always easy for you to live in your family. Do you remember the first day the two of us spent together? It was mid morning on a Monday, and I got a call from your mom. Would I be able to come pick you up? You were having a hard time at home and she thought it would help you to get out and do something different. So I came and got you and took you to do errands with me. We went to Norm’s Glass, Winco and Walmart. And everywhere we went you charmed the people we encountered, making my mundane errands a fun adventure. And really, Kalkidan, Norm’s Glass, Winco, and Walmart are not normally very exciting places to go. But with you, the ordinary was made extra-ordinary.

It was around that time that you started to spend regular time with our family and you added a spark that brought joy to our lives. There were usually a couple of days a week that I would pick you up after school and bring you home. We would make your favorite fried potatoes for snack and I would never cease to be amazed at how much food you could fit in your petite little body. You would usually convince me to cook 10 potatoes, and you would eat the equivalent of about 6 of those and the other three of us would eat the remainder. Of course we had to take our portions out first because you would add so much berbere and hot sauce that none of us could eat it. Then you and Eden would sit at the counter and I would do your spelling words with you. It was one of those afternoons when we had a conversation about skin color. Do you remember this? You said that someone had told you that you were black and Eden was white. But the two of you had figured out that you were brown and Eden was pink. As second graders, you and Eden figured that a lot of people didn’t really know their colors.

I was also thinking about your entrepreneurial spirit and the summer when you and Eden and Claire and Beza had a lemonade stand. I had to be in agreement with this idea because it isn’t something you could do from your house, given that your house is located on a highway and is not conducive to children setting up shop by the side of the road. You and Eden found a sweet spot that was just a block from our house, but on a busy enough street (F Street) that you could probably do pretty well. The spot was on the way to the pool and it was a hot day so you figured there was money to be made.

I wanted to make you do this independently but you convinced me to drive you down with your pitchers of lemonade, a TV tray to set things on, a box for your cash and your homemade sign. Half the lemonade spilled in the car, and you were worried that there wouldn’t be enough, but you all made the best of it and came home with $34 in spite of the spilled lemonade. I am pretty sure the cuteness factor had a lot more to do with the money you made than the particular quality of the lemonade. You marveled that no one wanted change. The next spring you were ready to go out and start the business again and could not understand why I didn’t think it was a good idea. The fact that it was 50 degrees and raining didn’t seem to deter you.

I went running this morning on the same route that you and I took the last time you spent the night at our house. I was going to get up early and run 3 miles that day. You told me you had regularly been running one mile and you were pretty sure 3 miles would be no problem. (As an aside, I have always admired your confidence.) So I came in to get you at 6AM, and you were already awake, which will be no surprise to your family. We left the house and about ½ mile in, you got a side ache. We didn’t run three miles that day and decided together that when track season came around you would probably be a sprinter and a jumper. I am quite confident that you would have had great success in both.

Do you remember when we went to Seattle to see my cousin play basketball? I told you that she is one of the shortest players in the Women’s NBA, and even though Kristi is 5’7”, I think you figured there isn’t that much difference between her 5’7 and your 4’11”. We met up with her after the game and I know she encouraged you to practice if you wanted to get better. You certainly took that to heart. You could play a mean game of “horse” and were especially proud of the time you beat Forrest. I think he would still debate you on that, but we know that you had a good competition going.

And competition was something that you liked – sometimes a little too much, maybe, but it was something that you were learning to use for good. In fact, the last time we played Yahtzee you were even happy for me when I got a yahtzee before you did. I was so proud of you for that. I am sure that your competitive spirit lives on and that right now you are rejoicing in having run, with endurance, the race that God set before you. You won, Kalkidan! You won the race and when we get to heaven I think you will want to remind us all of that – in a sanctified and wonderful way, of course. You got there first.

And Kalkidan, though we grieve our loss of you, we do not grieve as those who do not have hope. Because Kalkidan you are free – free from sin, free from sorrow, free from fear, free from trauma, free from shame, free from deadly viruses, and free from death. You are FREE! And now, Kalkidan, my dear friend, and sister in Christ, in the words of CS Lewis “Further up and further in!”

We love you, Kalkidan!

Thank you, friends, for reading and sharing this time with us as we remember our precious daughter.