Last Thursday Honeybee turned eleven.  If you’ve been reading my blog for awhile, you know that last year she also turned eleven.  Such is the world of international adoption.

While in the process of adopting Honeybee, we were told her birthday was sometime late in 1998, but nobody knew for sure.  Our agency gave us the opportunity to request a birth date for her and since she was small and had received only minimal education, we requested a birth date of September 9, 1999 (9-9-99 seemed nifty to us) . Russ and I were also concerned that having a birth date too close to Ladybug (Sept. 1998) would put pressure on Honeybee to catch up.  Our agency supported our suggestion and that is how her paperwork was processed.

We traveled to Ethiopia to meet her and she clearly knew that she was almost ten years old.  Later when we tried to explain that her paperwork said she was nearly nine, she didn’t buy it.  Since she spoke only a tiny bit of English, it wasn’t possible to explain the lengthy conversations we had had with adoption professionals and experienced adoptive parents that led us to that date.  In retrospect, I’m surprised we thought it would be so simple.

In fact, Honeybee and Ladybug were delighted to be the same age and instantly became “twins”, celebrating their birthday together on September 20th.

Within the first months we began to realize how very wide the maturity gap was between the two girls.  Ladybug has a “first born” personality that I can only attribute to the gap of four years between her and Rusty.  She leads the way for the younger six kids in the family.  While Honeybee was mature in her ability to do hair, cook, and care for Little Man, orphanage life had not allowed her to mature emotionally and she had a long way to go in learning how to live in a family.

This summer, as we made the decision to put Honeybee in school, we took a good look at her age once again.  Catching up academically has been a big challenge, one she has worked very hard on, but nonetheless, it takes time to overcome years of nearly no education.  We decided to place her in the fourth grade at a small Christian school and as we did, I ran the numbers in my head.  She would turn 12 at the beginning of fourth grade, which would make her significantly older than the kids in her class.

Russ and I talked, then we talked it over with Deborah, and we all agreed that Honeybee was running hard on a hampster wheel, trying to catch up with Ladybug, but making slow progress. Ladybug was going into seventh grade while Honeybee was going into fourth.  The physical differences were dramatic.  The emotional contrast extreme.  It was time to shut down the wheel and let her be younger, but I was worried about how she would feel.

When we presented the idea of turning eleven again,  she initially worried about what friends would think.  She feared they would think she had lied about her age last year.  But once the decision was made, she seemed happier, lighter, less burdened.  Ladybug has moved on to junior high life and Honeybee is free to remain younger. 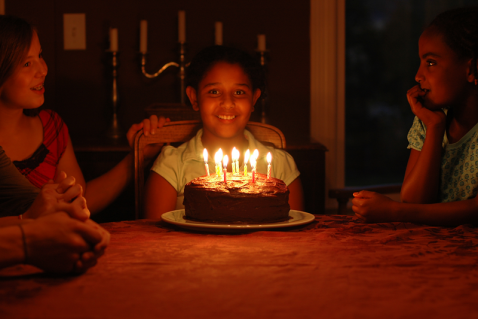